Posted on November 22, 2015 by TobysBeerReviews 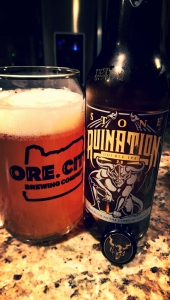 “Stone Ruination IPA was the first full-time brewed and bottled West Coast double IPA on the planet. As craft beer has evolved over the years, so too have techniques for maximizing hop flavors and aromas. For the second incarnation of our groundbreaking India pale ale, we employed dry hopping and hop bursting to squeeze every last drop of piney, citrusy, tropical essence from the hops that give this beer its incredible character. We’ve also updated the name to Stone Ruination Double IPA 2.0 to reflect the imperial-level intensity that’s evident in every sip. Join us in cheering this, the second stanza in our ‘Liquid Poem to the Glory of the Hop.'”

Poured from a 12 oz bottle into a can glass. The body is hazy-orange with moderate visible carbonation. The off-white, frothy head has good retention and leaves a fair amount of lacing on the glass.

A melange of hop aromas emanate from the glass: lemon, pine/dankness, tropical fruit, floral earthiness. The malts present themselves in a bit of a candy caramel scent. While hop-forward, the malt base balances things out well.

Medium-bodied mouthfeel, finishing dry with a lingering hop bite. It seems smoother than I remember the original being. The flavors match the nose pretty spot on: lemon citrus, pine, floral notes, with a touch of apricot sneaking in as well. The sweet, caramel malt character goes quite well with the complex hop profile.

Ruination 2.0 is a smoother, more complex and refined version of the original. Looking back at that review from over two years ago, a lot of the remarks I notated are similar to what I jotted down while drinking this one. That was a bit of a surprise, because my perception was that they were pretty different. I would say the main difference would be the smoothness of 2.0, while the original’s notes were more staccato and harsh. Others I’ve talked to about this beer are ~ 50/50 on Original vs 2.0, but I think I like 2.0 just a touch better. I gave the original an 8.5/10, and I don’t think this is quite a 9, so I’ll give it an 8.75/10.