Posted on November 9, 2015 by TobysBeerReviews 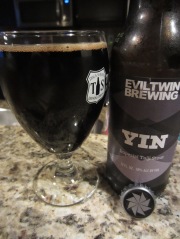 “This is one half of a Black and Tan drink. Not just any Black and Tan but the one where a toasted smug and hoppy fella get together to make a sublime beer balance. Mix the Yin & Yang together (or enjoy this profoundly evil Imperial Stout solo).” 10% ABV Imperial Stout

Poured from a 12 oz bottle into a stemmed teardrop glass. It pours with a viscosity not unlike heavy crude, with a very thin dark brown head that dissipates quickly. The body is jet black.

I really expect a huge, chocolaty, malty aroma based off of the pour, and unfortunately Yin doesn’t particularly deliver. Faint chocolate notes, both milk and dark, are the main aromas. Underneath that lightly smoked malts mix with some alcohol presence. All are very light for such a big beer.

The mouthfeel is thin for a 10% imperial stout, and well balanced in the sense that neither malt sweetness nor hop bitterness stand out. The flavors match the aromas pretty dead on, faint milk/dark chocolate notes are the most prevalent. Some smokey, toasted grain flavors give way to alcohol notes, which are a bit stronger than in the aroma. That being said, the alcohol heat is certainly not off-putting, and overall it doesn’t drink like a 10% beer.

The flavors and aroma of Evil Twin Yin didn’t live up to the thick, glugging pour that set an expectation of a rich, malty, warming Imperial Stout. I was really expecting more from this beer, and it was somewhat disappointingly tame. There was nothing bad or distracting in this beer, but as the description lists, it really seems like half a beer. 6.5/10

Oh, I get it now. These beers really need to be blending together. That’s much better, with a solid mix of flavors that pop much more than when had individually. By themselves, they are so-so. Together, they are quite good. Yin & Yang Blend: 8/10

This entry was posted in Beer Reviews, IPA, Stouts/Porters. Bookmark the permalink.