Posted on July 8, 2014 by TobysBeerReviews 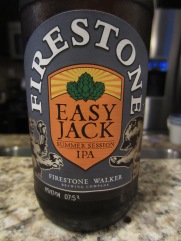 “Brewmaster Matt Brynildson went to the mountain and returned with a vision for a different kind of Session IPA, one that would be brewed and dry hopped with a globetrotting selection of new hop varieties from Europe, New Zealand and North America. He foresaw a beer that would deliver massive hop aromas, a signature malt balance and an empty glass before you knew what hit you. And so the newest member of our Jack IPA family was born.” 4.5% ABV American IPA

Purchased from BevMo in Clovis, California. 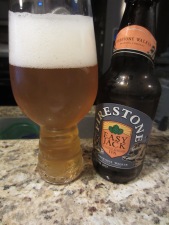 Poured from a 12 oz bottle into a Spiegelau IPA glass. The body is light yellow-golden with a touch of an orange hue, showing light haziness. The foamy head is almost pure white, which has decent retention and leaves good lacing. Ample carbonation can be seen in the glass. 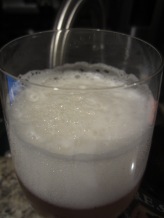 It definitely smells like a Firestone Walker IPA, amply dry-hopped to give off grapefruit, tangerine, lemon, and even some pomegranate aromas. English pale malts come through at the back end of the hop forward profile. 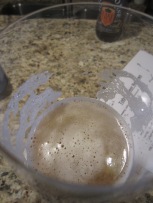 Easy Jack is thin bodied, as expected for a beer of only 4.5% ABV, and is softer in the mouth than the big hop aromas would suggest. The carbonation is moderate, and the hop bitterness is subdued. There isn’t a whole lot of flavor initially in the mouth; most of the flavor comes through in the aftertaste. The aftertaste offers some grapefruit and lemony zest, with a touch of the sweet base malts. It finishes a little wet/watery, so it doesn’t standout as being particularly refreshing. 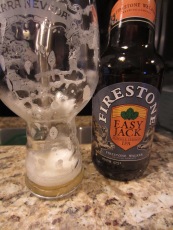 Firestone Walker offers a solid entry into the session IPA craze going on this Spring/Summer with Easy Jack, but given a choice I would go for a regular Union Jack probably every time. But with nearly all of the other big West Coast craft breweries making session IPA’s, Firestone Walker couldn’t be left behind. Maybe a few more IBU’s or a little more carbonation would make this one seem a little more palate cleansing and refreshing, which would bump it up to Union Jack levels for me. Perhaps I just don’t particularly get the point of a toned-down IPA. Whatever the case may be, it’s a good-not-great beer worth trying. 7.5/10