“You don’t need a magic mirror to see the lure of this beer. It’s brewed with seven varieties of experimental dwarf hops. These hops are so called because of their uncommon growing method—shorter hedgerows rather than tall trellis systems—that yields a denser heap of cones with unique flavors that diverge from their full-grown botanical counterparts. Each year new and different varieties are grown in this method, creating untried and exciting shifts in hop character.” 5.7% ABV Belgian IPA 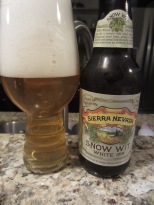 Poured from a 12 oz bottle into a Spiegelau IPA glass. The body of the beer is ever-so-slightly hazy and yellow in color. A very large fluffy, mostly-white head is poured, which has great retention throughout and leaves thick lacing. Ample carbonation is visible in the glass.

Herbal citrus notes are the main aromas. Faint danky hop character also mixes with some peppery spiciness, which is where the wit beer properties come through.

Snow Wit is medium-thin bodied and goes down pretty smooth, offering light bitterness and carbonation. A faint cracker-y malt profile comes through initially as is goes down, before giving way to lingering aftertaste the combines the zesty lemon, slightly fruity and earthy herbal tones, and coriander spice.

Snow Wit is a very easy to drink beer. It seems even lighter than it’s labeled 5.7% ABV. As part of an IPA variety pack, it isn’t a bad offering, though it isn’t my favorite. I think that Sierra Nevada accomplished what they intended with this brew, as the imparting of relatively mild Northwest hop character into the lemony, peppery wit style certainly works well as a mix. That being said, I’ve had much better beers, and better beers in the style. 6.5/10