Posted on March 30, 2014 by TobysBeerReviews

This beer is pretty widely available, but I got this bottle from a friend.

Poured from a 12 oz bottle into a Spiegelau IPA glass. The beer is remarkably clear, with a nice coppery/honey color. A fair amount of carbonation can be seen rising in the glass. A large, mostly white is poured, which retains decently and leaves good lacing.

Rebel IPA has a pretty mild aroma profile, especially considering most West Coast/San Diego IPA’s are very hop forward in the nose. Understated citrus tones are about all I detect as far as hops go. Again, the style dictates ample grapefruit and some resinous pine dankiness, but that doesn’t really appear in this offering. The malt characteristic is reminiscent of a honey ale, but I also smell some fruity sweetened cereal aromas (like Crunch Berries). There is also just a faint scent of a sourness I can’t quite put my finger on. 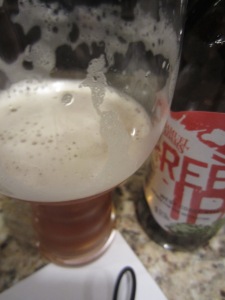 Medium-bodied and a bit harsh going down, mostly carbonation burn but some hop bitterness as well. The flavors are pretty muted, beginning with light citrus hops. The slightly fruity cereal malt base balances out the relatively low 45 IBUs, but the flavor is just as subdued as in the aromas. Some floral hops come through after going down, mixing with the citrus  hops and lingering on the palate. The overall profile comes across as muddled, and what is normally a very clean, distinct finish in other West Coast IPA’s just isn’t what I’m getting with this one.

I have really grown to like West Coast style IPA’s over the last year, and Rebel IPA just doesn’t match up with the quality I’ve become accustomed to. The aroma and flavors aren’t bold or distinct, the hops seem muddled, and I find just about everything to be lacking. There is nothing terribly wrong with this beer, but I can’t find anything I really like about it, aside from it’s very beautiful appearance. I can’t even say I would recommend this to non-IPA drinkers as a lighter entry in the style, mainly due to the fact that it’s just not a good example of the style. 5/10