Posted on March 11, 2014 by TobysBeerReviews

“This is our salute to the fruit tramps of the ’30s who worked from sun up to sundown. Reward your endeavors with this fruity beast. Come get you some!

Our fruit wheat beer is very popular so it only made sense to give you more! That means more malt, more fruit… more, more, more. Few brewers will take a wheat beer to the level of wheat wine, but we did. The recipe is almost double that of our fruit wheat. 168 pounds of strawberry puree was added to the fruity beast. Be careful, it’s sneaky. It rings in at a well hidden 9.8%.” 9.8% ABV Wheat Wine

Purchased from Save Mart in Madera, California.

Poured from a 22 oz bomber into a snifter. The body is hazy and yellowish-orange in appearance. A small, white, fluffy head is poured, which thins to a wispy covering and leaves decent lacing. Moderate carbonation can be seen in the glass.

Faint wheat beer characteristics, including a bit of salted caramel. The strawberry is understated, and comes across as a little sour. Mild alcohol is also present. The aromas are pretty light for such a big ABV brew.

Super Tramp has a medium-rich body, which is pretty smooth going down and finishes with moderate carbonation harshness. The flavors match the nose, in that the strawberry notes take a back seat to the wheat beer base. The aftertaste gives a mild alcohol kick, and a lingering salty malt characteristic lingers on the palate. It is very drinkable for such a high ABV, drinking much like a smaller wheat beer. 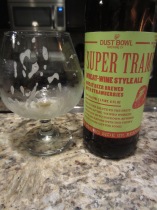 Super Tramp is my first wheat wine, and I had no idea what to expect from the style. It ends up being pretty much in line with smaller wheat beers I’ve had (though I admit to a certain level of inexperience with wheat beers), with a subtle alcohol kick on the back end. I expected the strawberry flavor to be much more prominent, and think the brewery definitely could have gotten away with a larger fruit infusion without the flavor coming across as gimmicky or sickly. What I’m left with is a strong wheat beer, which is an interesting experience, but a ways off from great. 7/10.

This entry was posted in Beer Reviews, Wheat Beers. Bookmark the permalink.