Posted on January 16, 2014 by TobysBeerReviews

“Our Victory at Sea Imperial Porter is a bold, smooth brew with just the right amount of sweetness. We infused this robust porter with whole vanilla beans and San Diego’s own Caffe Calabria coffee beans. The subtle roasted notes and minimal acidity of the cold brewed coffee, balances perfectly with the sweet caramel undertones of the malt, creating a winning combination for your palate.” 10% ABV Imperial Porter

This one has been in the beer fridge for a while, and I can’t remember where I got it. It was either BevMo or The Fort in Fresno, California. 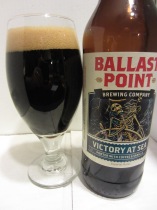 Poured from a 22 oz bomber into my porter/stout glass. The color is black, with a tiny bit of ruby-red around the edges. A brownish-tan frothy head is poured, which has decent retention for a 10% beer, and leaves good lacing. Minimal carbonation can be seen in the glass.

The predominant aroma is dark-roast black coffee, and a lot of it. I also get some dark charred malt, some bitter dark chocolate, light vanilla, and some wood notes. I don’t get any alcohol scent, impressive for such a large beer.

Medium-bodied with a relatively soft mouthfeel for such a big beer, finishing with light hop bitterness. The taste is almost all dark roast coffee, but offers rich undertones of chocolate, vanilla, wood, and a bit of lactose cream. I also detect some caramel malt sweetness, and a bit of sticky wetness is left on the palate after going down. The aftertaste is of lingering black coffee bitterness. Again, there is hardly any alcohol noticeable in the flavors. 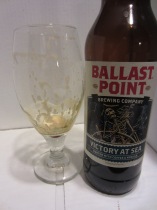 There is definitely a difference between coffee infused beers, and beers that have natural coffee tones from the malt profiles. Victory At Sea is certainly an example of the former, as its coffee characteristic makes it seem like a coffee with beer traits, instead of the other way around. I’m surprised that this is a 10% ABV beer, as it drinks much lighter (though I begin to feel the alcohol as I type up this review). This beer keeps getting better as it warms, and while not quite perfect, it still deserves a 9/10.

2 Responses to Ballast Point: Victory at Sea (Imperial Porter with Coffee and Vanilla)