Posted on January 11, 2014 by TobysBeerReviews 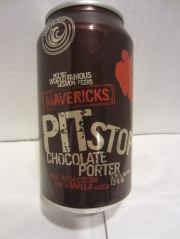 “This dry porter is brewed with a special blend of roasted barley malts and raw cocoa beans, to create subtle, but complex hints of dark chocolate, especially in the aroma.” 3.75 % ABV Chocolate Porter

Poured from a 12 oz can into my Libbey porter/stout glass. It looks very much like a typical porter; dark ruby-red/brown with a small amount of opaqueness. Light carbonation can be seen bubbling up the glass. A good amount of brownish-tan head is poured, which retains decently and leaves light lacing.

The main aroma is of darkly-roasted barley, while lactose, bittersweet chocolate, and mild vanilla undertones are all prevalent. I don’t get anything in the way of hops, and no alcohol can be detected (and at 3.75%, I would have been shocked if any was present). All the scents are light, right in line with the idea of a sessionable, low ABV ale.

Mavericks Pit Stop Chocolate Porter has a medium-thin body, finishing pretty easy with gentle carbonation noticeable. As it finishes, the flavors begin to come through. As with the aromas, the flavors are quite light, with a vanilla/chocolate combination initially. This leads to a lingering roasted barley/grain aftertaste, with a light chocolate background.

This was the last of a six pack that has been lingering in the back of my beer fridge, and I probably shouldn’t have waited so long to review it. I seem to remember there being a more pronounced chocolate flavor, and with this being such a low ABV, made to session beer, I can see how it wouldn’t age particularly well. However, it still accomplishes its goal of being an easy-to-drink session porter. It went down easy and fast, and a six pack could definitely disappear quickly during a ball game. The flavors are decent at its best, but certainly nothing offensive. Hopefully I’ll get to try some others in the Mavericks collaboration series soon. 6.5/10