Posted on December 15, 2013 by TobysBeerReviews

“Batch 250 is an Imperial IPA hop bomb! Pounds of Simcoe, Centennial, and Summit hops make up the backbone of this 10% beast. We toast to all the craft beer drinkers in the San Joaquin Valley who have helped make our milestone possible. Cheers!” 10.3% ABV Imperial IPA

Purchased from The Fort in Fresno, California

Poured from a 22 oz bottle into a stemmed ale glass. Hazy appearance, with an orange-hued amber color. Light carbonation is visible. A modest off-white, foamy head is poured, which leaves good lacing throughout. 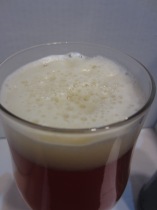 A thick-bodied ale, with little carbonation noticeable in the mouthfeel. Piney and grapefruit bitterness and flavor come through immediately upon entering the mouth. Sweet base malts are presented, but even in their ample quantity, they can’t balance out the long-lingering hop flavor and bitterness.

Tioga-Sequoia set out to make an absolute hop bomb of a beer, and certainly accomplished that feat. Many Imperial IPA’s I’ve had are quite balanced, due to their huge malt base. Batch 250 obviously added a ton of hops to make sure it is an overtly hop-forward imperial IPA. The hop flavors are very strong from beginning to end, and done pretty well. As I get near the end of the bottle, the mouthfeel is getting more and more sticky/syrupy, losing a little of its luster. But overall, this is a pretty darn good beer, assuming you are prepared for the hop overdose throughout. 8.5/10