Posted on November 29, 2013 by TobysBeerReviews 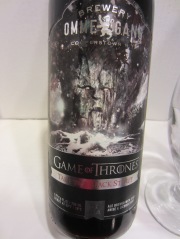 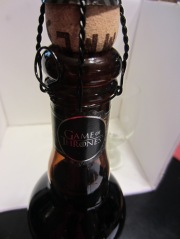 “A stout as dark as the winters that once engulfed Westeros. As robust as the men who swear their oaths at the Weirwood tree. Chocolate and caramel sweetness are balanced by hop bitterness. Roasty, woodsy notes and an earthy finish.” 7% ABV Belgian Dark Ale

Purchased from BevMo in Fresno, California.

Poured from a 750 mL bottle into my stout glass. The body is black in color, with minor visible carbonation. A very large brownish-tan head is poured, which retains nicely and leaves thick lacing.

Roasted, smokey malts are the initial aromas, followed by the star anise/black licorice combination listed on the bottle. There are also typical Belgian spice/yeast characteristics. The faintest bit of a chocolate undertone can also be detected.

Medium bodied, with light-to-moderate harshness from the carbonation. The roasted malts are the initial flavor in the mouth, mixed with a bit of bittersweet chocolate. It finishes dry, with a decent amount of general hop bitterness. The star anise and licorice come through immediately after swallowing, with a lingering earthy/Belgian yeast spice bitterness.

A Song of Ice and Fire is definitely some of my favorite fantasy reading, and the TV show is done quite well (as many people already know). If the cultural success of Game of Thrones leads to “selling out”, I’m happy said selling out leads to new beer to try. All that considered, Ommegang’s Take the Black Stout is a decent, not great beer. It has many Belgian characteristics, just not on the super sophisticated level of some others I’ve tried. The star anise and earthy, woodsy notes really are the main traits throughout, and while they aren’t off-putting, they aren’t my favorite. I wouldn’t really call this beer “gimmicky”, as casual beer drinkers would likely take one sip and spew, so that’s a plus. As I drank it, I could only wonder how the thick, black ale often described as being served in the inns along the Kingsroad compare. 6.5/10