Posted on September 13, 2013 by TobysBeerReviews 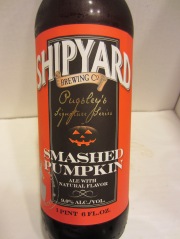 “Smashed Pumpkin is a big-bodied beer with a light coppery orange color and pleasing aroma of pumpkin and nutmeg. The OG and final Alc./Vol. provide the structure and body. Pale Ale, Wheat and Light Munich Malts combine with the natural tannin in             pumpkin and the delicate spiciness of Willamette and Hallertau Hops to balance the sweetness of the fruit. To fully enjoy all the flavors, this ale is best drunk at 55 degrees Fahrenheit. Smashed Pumpkin pairs well with sharp cheeses, nuts, lamb, hearty stews and desserts like flan or pumpkin pie. Chefs find this an excellent beer to cook with in dishes such as braised short ribs” 9.0% ABV Pumpkin Ale

Poured from a 22 oz bomber into my stemmed ale glass. The color is an orange/amber tone, with relatively clear visibility and ample carbonation. Moderate lacing is left on the glass.

The aromas are surprisingly light for such a big beer; I get nutmeg spice and faint cinnamon and pumpkin notes.

Again, I’m a little surprised by the lightness of the body of the beer. It isn’t super light, but does have a crispness to it usually missing from big ales. The flavors do come through more so than the aromas, especially as it warms. The initial flavors are of nutmeg and other autumn spices. I don’t really get too much pumpkin in the way of flavor (If I really seek it out I can barely get subtle amounts). It finishes smooth and easy, with little hop bitterness, and the faintest hint of alcohol. The main lingering aftertaste is of cinnamon spice.

Initially, I didn’t think too much of Smashed Pumpkin. It definitely improves as it warms closer to room temperature. Lo and behold, it says to enjoy it at about 55 degrees right on the bottle. It tastes like autumn in a bottle, with cinnamon and nutmeg being the mainstays. In my neck of the woods, temperatures are still hanging out in the mid 90’s here in mid-September, so maybe I should have held off a month or so to enjoy this brew. Or better yet, a year of aging probably would really calm this beer down a bit. Maybe I’ll pick up another bottle for that purpose before it’s out of season. Not too bad for my first pumpkin ale. 7/10.

This entry was posted in Beer Reviews, Fruit Beers. Bookmark the permalink.