Posted on August 15, 2013 by TobysBeerReviews 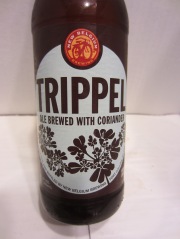 “Our Trippel Belgian Style Ale (pronounced triple) opens with a bold blast of hops that slowly gives way to the fruity esters implied by our Belgian yeast strain. In the Belgian tradition of brewing singles, doubles and triples, Trippel is the strongest with the longest fermentation. Remarkably smooth and complex, our bottle-conditioned Trippel is spiced with a trace of coriander.” 7.8% ABV 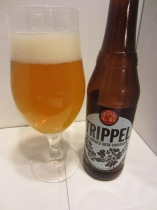 Poured from a 12 oz bottle into my Belgian Ale glass. The color is golden yellow, with a nearly white head that leaves some lacing throughout. A lot of carbonation is visible in the glass. 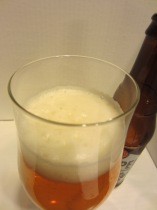 All of the typical Belgian characteristics; banana bread, yeastiness, and a hint of spice. 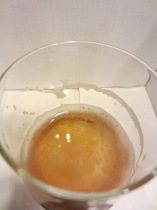 Medium bodied, going down with surprisingly heavy harshness from the carbonation (it also seems bitter, but I don’t get any detectable hops in the flavor). The flavors follow the nose identically; banana, yeast, and spice characteristics. It finishes a little dry (and harsh), while the aftertaste is mainly of banana, which lingers on the palate. 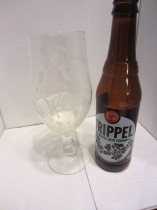 While the flavor in this beer is interesting, it is kind of a one-trick pony. The aroma, initial flavor, and aftertaste are all the same. No surprise flavors sneak in whatsoever. This, combined with rather harsh carbonation going down, make this a Belgian style ale I probably won’t miss if I don’t have again. 6.5/10

This entry was posted in Beer Reviews, Belgian, Light/Pale Ales. Bookmark the permalink.