“This unique brew combines all the traditional qualities and style of a Charles Wells beer with the subtle flavour of banana.

Wells Banana Bread Beer is a popular beer in the Wells and Young’s range of ales. The beer has achieved a number of accolades including winner of ‘Beer of the Festival’ award at CAMRA’s London Drinker Festival in March 2002.” 5.2% ABV

Purchased from MarVal in Prather, California.

Poured from a 16.9 oz bottle into a nonic glass. It looks pretty much exactly like a glass of apple juice, with some carbonation added in. A thin white head is poured, which dissipates quickly. Moderate lacing is left on the glass.

Lots of candied banana aromas emanate as soon as I pop the cap. There is some malt sweetness as well as some clove spice in the aroma as well. 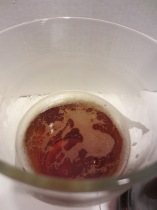 Medium-bodied, with some carbonation harshness going down. The initial flavor begins with the candied/faux banana from the nose, but quickly gives way to a more natural banana flavor that blends with sweet maltiness. A bit of spice zest shows up on the tongue after swallowing, followed by some earthy hop flavor and bitterness. The natural banana flavor reemerges to linger in the mouth.

I was a little worried when I popped the cap, as tons of fake/candy banana scents flowed from the bottle. It toned down quickly, and the flavor of the beer is more natural banana tasting. The “beer” portion of this ale is decent (not spectacular), so drinking this beer is purely out of desire for the banana flavoring. The beer is exactly what it means to be. A neat beer to try, and maybe have on a rare occasion, but not one that will make it’s way into my regular rotation. If banana flavoring is really your thing, you’ll likely especially enjoy this ale. 6.5/10

This entry was posted in Fruit Beers. Bookmark the permalink.