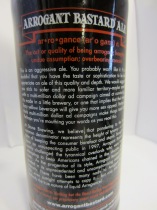 “This is an aggressive ale. You probably won’t like it. It is quite doubtful that you have the taste or sophistication to be able to appreciate an ale of this quality and depth. We would suggest that you stick to safer and more familiar territory–maybe something with a multi-million dollar ad campaign aimed at convincing you it’s made in a little brewery, or one that implies that their tasteless fizzy yellow beverage will give you more sex appeal. Perhaps you think multi-million dollar ad campaigns make things taste better. Perhaps you’re mouthing your words as you read this.

At Stone Brewing, we believe that pandering to the lowest common denominator represents the height of tyranny – a virtual form of keeping the consumer barefoot and stupid. Brought forth upon an unsuspecting public in 1997, Arrogant Bastard Ale openly challenged the tyrannical overlords who were brazenly attempting to keep Americans chained in the shackles of poor taste. As the progenitor of its style, Arrogant Bastard Ale has reveled in its unprecedented and uncompromising celebration of intensity. There have been many nods to Arrogant Bastard Ale…even outright attempts to copy it… but only one can ever embody the true nature of liquid Arrogance!” 7.2% ABV 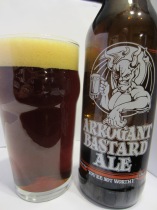 Poured from a 22 oz bomber into my nonic. The color is deep coppery red. The head is tan and foamy. Good lacing is left on the glass. 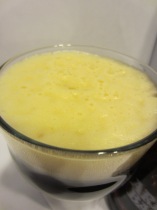 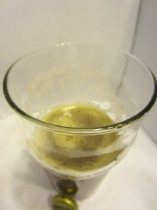 Medium-bodied and a bit harsh going down. An initial punch of powerful, bitter hops hit the front of the mouth. This leads to an aftertaste of even more bitter, super-aggressive floral hoppy bitterness. 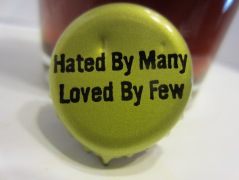 Arrogant Bastard is probably the most bitter beer I’ve ever had. Each mouthful wallops the tongue and palate with the very properly-labeled aggressive hops. The nose is typical of a hoppy pale ale, but the taste is unlike any beer I’ve ever had. The extreme amount of bitterness makes this one of the most intense beers I’ve ever drank. Definitely only for those who think of beer in terms of “the more bitter the better”. I guess I don’t have the sophistication level as a beer drinker to meet the target audience Stone is trying to reach with this brew. I would say toning down the near psychotic bitterness would be what I recommended to make this more drinkable, but I know that Stone makes this beer exactly the way they want to. But, being around and going strong since 1997 means people do really like it, so I know my score doesn’t match the care and effort put into this beer. 4/10