Posted on April 22, 2013 by TobysBeerReviews 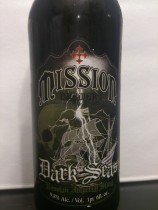 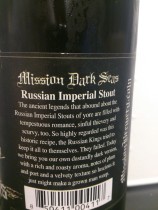 “The ancient legends that abound about the Russian Imperial Stouts of yore are filled with tempestuous romance, sinful thievery and scurvy, too. So highly regarded was this historic recipe, the Russian Kings tried to keep it all to themselves. They failed. Today we bring you our own dastardly dark version, with a rich and roasty aroma, notes of plum and port and a velvety texture so luscious it just might make a grown man weep.” 9.8% ABV

Poured from a 22 oz bomber into a brandy snifter. Dark Seas pours thick like used motor oil and is completely black in color. A small deep, dark brown head is presented initially and dissipates quickly. Minimal lacing is left on the glass.

Rich sweet malts and chocolate, with undertones of dark fruit and alcohol.

Very smooth and thick going down, with not nearly as much bitterness as I expected based off the nose. The initial flavors follow the nose well; sweet malts, dark chocolate, and alcohol. These lead to slightly bitter coffee/espresso/mocha like flavors that lingers on the palate. There is also some general alcohol warmth offered. 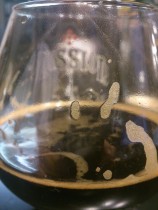 A good, tasty brew. There is a really nice blending of flavors offered. The sweet malt/chocolate/espresso aftertaste is done very well. The flavors aren’t as bold as some of the other imperials I’ve had, and the alcohol presence will likely scare away the average beer drinker, but it is definitely a must for a seasoned stout connoisseur. 8/10