Posted on April 3, 2013 by TobysBeerReviews 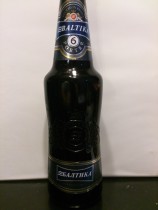 “The Baltika №6 Porter beer was designed and launched in production in 1994. This traditional dark beer is brewed according to old English recipes. The elite hops, special yeast, purest water and high skill of the brewers are a guarantee of the popularity of the Baltika Porter. Baltika Breweries makes this beer using the best kinds of dark and pale malt.” 7% ABV

Poured from a 0.5 liter bottle into my nonic imperial pint glass. This beer pours nearly black, with a dark ruby red letting some light through around the edges. The khaki colored head is dense and foamy, and settles into a thin layer that lingers throughout.

All of the scents coming from this beer are light, nothing substantial being offered. In order: sweet malts, lactose, dark fruits, cola.

The first mouthful I got was an almost unbearable metallic-like taste. The second sip had less, and after a few more it was pretty much gone. Not too sure what that’s all about. Moving on…the flavor follows the nose pretty accurately. Slightly sweet/roasted malts and lactose. I don’t get any chocolate flavor, as many of the reviewers on Beer Advocate say they are getting. There is also no discernible alcohol flavor, somewhat impressive at 7% considering the other flavors are not bold in any way.

Baltika #6 is my first actual Russian beer (made in Russia). The bottle I got was brewed in December, with a one year bottle freshness date. That means that I likely got the proper representation that this beer has to offer, and I am sadly unimpressed. All the beer’s flavors are slightly off from the style, and that makes them blend together poorly. While not undrinkable, I won’t be reaching for another bottle any time soon. If you are looking for a good porter, keep looking. 3/10.